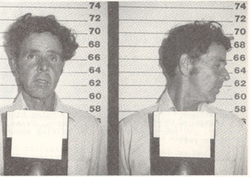 Henry Lee Lucas is known as the "Confession Killer" because he claims to have killed a victim and then he later recounts the claim.  His first claim is at the age of 15, killing a girl who rejected his sexual advances, and then dumping her body.  He later claimed not to have done this and there was also no body found, hinting that this claim may have been false, although that was not proved either.
Henry was put into jail for several counts of burglary in 1954 at the age of 18, for six years.  Henry was let out one year early despite attempting to escape once, he then moved to Tecumseh, Michigan with his half-sister Opal.  While he was in Michigan he became engaged to a girl he had recently met. His mother, Viola, strongly disapproved. She moved out to Tecumseh to try to stop him, which lead to multiple disputes until Lucas finally ended it all by his mother.  Henry claimed it was self defense because Viola had a broomstick, but he slashed her neck with a knife, causing her to bleed-out and have a heart attack after he fled the scene.  He was caught in Toledo, Ohio, put on trial and sentenced to 20-40 years in prison.  With definite psychological problems, Henry tried to kill himself twice during the ten years he was there, before being released on part of the prison overpopulation.
He was back in within a year for the attempted kidnapping of two teenage girls and then spent another three and a half years imprisoned.  after drifting around for awhile he ended up meeting his infamous partner-in-crime, Ottis Toole.  The two shared an interest in the same dark things and had the same obsession with sex and death.  Henry fell in love with Ottis' niece, "Becky" Powell, who was ten years old at the time.  Ottis and Henry claimed to have killed and raped hundreds of victims during their time together, but none were ever proven.  Becky and Henry had become smitten with each other and moved to Stoneburg, Texas leaving Ottis alone and outraged enough to go on his own killing spree.
While in Texas Henry and Becky lived together and worked for an elderly woman named Kate Rich, who eventually fired them for stealing money. Becky became homesick and insisted they return to Florida, but Henry didn't like this idea, so he killed her, dismembered her and scattered her body parts around a field.  He contacted Kate Rich to help look for Becky, who "ran away after a dispute", and then he took her to another field, killed her, and stuffed her body into a drainage pipe.  Lucas later returned to the scene of the crime, recovered the body, took it to the house of prayer, and incinerated it in the stove.  He was put on a polygraph test, passed it, and then was arrested for illegal firearm possession.  After four days in jail the evidence was recovered and he was convicted of the murders of the two women.
This is when the confessions came, Lucas began to confess to hundreds of murders, some of which were completely impossible on part of the people being still alive, the murders being in different countries, or the date and time not matching up with where he was at certain times.  Only a handful of the confessions turned out to be true, including the murder of an officer, Clemmie Curtis, who had been handcuffed and shot in the chest with his own police revolver.  Henry was sentenced to death in the state of Texas under George W. Bush.  However, Lucas died in prison on March 13, 2001 from a heart attack.

Henry Lee Lucas is hard to profile in this area.  Lucas tended to be a serial liar along with being a serial killer. No ritual or order of events was really evident in all of his killings, but all of them included two things a majority of the time.  Excessive stabbing was present in nearly all of his proven murders, and also the unproven ones.  Another common theme was rape, whether it was while the victim was still alive, or post mortem.  When asked about his M.O Henry said: "I killed 'em every way there is except poison. There's been strangulations, there's been knifings, there's been shootings, there's been hit-and-runs..."  Lucas had no real routines or patterns in his murders, he was unpredictable and used whatever was handy.